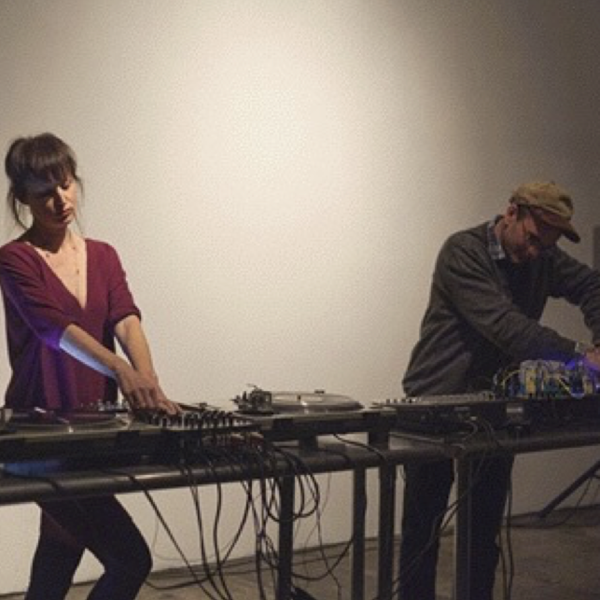 Marina Rosenfeld and Ben Vida began working together in 2014. Based in New York, both Rosenfeld and Vida have multifaceted careers as solo artists and composers. The duo’s spontaneous electronic performances foreground the mutability of concrete sound and the physical and conceptual dimensions of synthesized and composed material. Performances include Festival MADEIRADiG, Museu De Arte Contemporanea, Madeira; PRESENCES électronique, GRM/INA, Paris and New Ear Festival at Fridman Gallery, NYC. In 2016 they released Feel Anything on iDEAL records. Their forthcoming release, Vertice will be offered as a gallery edition through the Fridman Gallery, NYC.

Marina Rosenfeld is a NY-based composer and artist working across disciplines. Since the 1990s, when she mounted her first all-female electric-guitar ensembles under the name Sheer Frost Orchestra, her works have probed the intersections of experimental practices in sound with performance, installation and sculpture, with solo presentations at institutions including the Park Avenue Armory, the Museum of Modern Art, the Bard Center for Curatorial Studies, Portikus Frankfurt, the Kitchen, and The Artist’s Institute, among others. Her work has been included in the Whitney (2002 and 2008), Montreal (2015), and PERFORMA (2009 and 2011) biennials, and international surveys including “Every Time A Ear Di Soun” (Documenta14), and Tasmania’s “Dark Mofo” in 2019. In the contemporary music field, she has created works for the Holland, Borealis, Wien Modern, Time:Spans, Maerz Musik, Vancouver, Pro Musica Nova, Donaueschingen and Ultima festivals, among many others. Rosenfeld has also performed as an experimental turntablist since the late 1990s. Her collaborators have included Christian Marclay, George Lewis, Okkyung Lee, Ikue Mori, Annette Henry aka Warrior Queen, Ben Vida, DJ Olive, and Christoph Kurzmann, among many others too numerous to list. Rosenfeld has been the co-chair of the MFA in Music/Sound at Bard College since 2007, and has been a visiting professor in sound, sculpture and performance at Cooper Union, Harvard, Yale School of Art, and Brooklyn College. She lives and works in Brooklyn, NY.